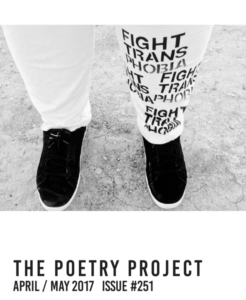 I saw a video online of Ed Sanders, Jack Kerouac and Lewis Yablonsky discussing the political moment happening in 1968 with William F. Buckley on Firing Line and I asked Ed Sanders if he still stands by the visions of love & light that he talked about in that interview. I really hoped he would say that even in the dire circumstances we find ourselves in now he still believes. His gracious response is included in issue #251.

Now available online, issue #251 was my last one as editor for the Project Newsletter.

Contents include a memorial for Ray DiPalma with some of his work and investigations into our current political moment, TELL PEOPLE THEY CAN FUCKING WIN, curated by Jen Hofer.

I hear the latest issue #252, put together by Marwa Helal, is just back from the printer and should be dropping soon. I’m so excited to see it.

The Firing Line episode with Ed Sanders is available here.